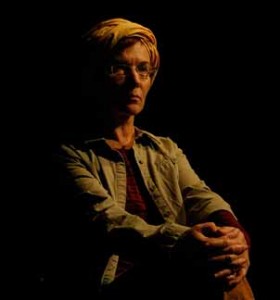 Artistic Director and Choreographer of the Litecox Compagny
Daisy Fel started to practice dance trough improvisation with musicians from the LMC –
London’s Musicians Collective – and begin to form at the Graham school – The Place – as well at
the Rosemary Butcher and Richard Alston courses.
She continue her training of contemporary dance with Kilina Cremona, Roger Meguin and
Michel Hallet-Eghayan. She’s very impressed by Odile Duboc, during a stage with her and Barre
Philips ; then by Trisha Brown during an other stage in Avignon. A saison passed with Christiane
Viricel will mark her work in staging and composition.
Co founder of the « Instant T » collective in Saint-Etienne in 1983, she create the actual
Litecox compagny in 1990. She regularly carries performances with musicians, Nicolas Allemand,
Guillaume Orti, Philippe Bourlois and the members of the ARFI.
For her creations, Daisy Fel work in close collaboration with visual artists, Carmelo Zagari,
Jean-François Gavoty, Bruno and Marino Thery, Euan Burnett-Smith, Olivier Bouton, some
compositors, Jean-François Minjard, Michel Mandel, François Payrastre and lately with the singer
Ilhem Dehimi.
Otherwise, accorded to the artistic career of Daisy Fel, formation and sensitization to the
dance is a big part in the work of the compagny ; organized and carry out by stages, workshops,
animations and conferences, witch match to that wish to open the space inbetween creation and
formation.